While the infectious agent was named a prion, the specific protein that the prion was composed of is also known as the Prion Protein (PrP), though this protein may occur both in infectious and non-infectious forms.

There is a class of human proteins that if tampered with bring genetic deterioration, these microscopic destroyers are known as Prion Proteins. These proteins, when corrupted, are responsible for what could be described as a rogue agent acting unlike itself, spawning crystalline malformations at an intrusive degree, rendering the infected vessel obsolete. In animals such as deer and elk, these misfolded prions cause Chronic Wasting Disease (CWD) of the brain, very similar to Bovine Spongiform Encephalopathy (BSE) in cattle, or “Mad Cow” disease, which causes “crystalline clumps” to form in the brain and spinal cord, causing deterioration. These symptoms are also present in human cases of Dementia, Alzheimer’s disease, Parkinson’s disease, and many others, all associated with prion misfolding. These mysterious prion proteins are suspected to have many functions, but the main assumption of their role is to help facilitate the transfer of neural information between cells.

“The normal prion protein is found throughout the body and brain. While not essential to life, it does seem to play a role in helping your neurons communicate and transport minerals. Its amino acid chains fold into mainly a helical shape”. – UCSF

The discovery that prion proteins were responsible for these horrific diseases was a shock, as proteins do not carry the genetic material that bacteria and viruses need to reproduce, thus putting the misfolded prion into a different class of attacker.

“The particles that spread scrapie consist of highly stable crystals of a normally innocuous material found in the brains of sheep. Crystalline clumps of a misfolded version of this protein coax other molecules of the same protein to fold into the aberrant conformation. The process continues until virtually all of that protein in a cell or tissue has been converted to prions”. – Randal Halfmann

Most cases of prion disease are sporadic; that is, they arise spontaneously for no known reason.- MRC

There are many theories as to why prion proteins turn abnormal, but generally it’s still regarded as mystery, though it is known that prion diseases are the only known diseases that can be sporadic, genetic or infectious. We believe the technology below is possibly responsible for the mysterious “triggering agent” of these diseases. The conspiratorial ELF cell phone towers are just that, a conspiracy. It’s been discovered these towers are pulsing out frequency at much higher rates than needed for cell phones to operate. Why? There is surmounting evidence pertaining to their main function which involves weather modification programs being used to manipulate the firmaments as a supposed “defense” against climate change.

The reason we find this important is the “crystalline clumps” that makeup the infectious prions are just that, crystals! Crystals are energy/frequency receivers and transmitters, and would be ever so susceptible to a mass onslaught of weaponized frequency. It also turns out that yeast, a fungus in grain, harbors many prion proteins. We as humans consume on average 130 pounds of grain per year– this brings the Genetically Modified Organism fight to a new light. If we humans naturally have, in mass, prion proteins susceptible to infection while also ingesting them rapidly through our food, on top of being exposed to the uberElite’s tools of destruction, it takes no genius to assess our ultimate destination. 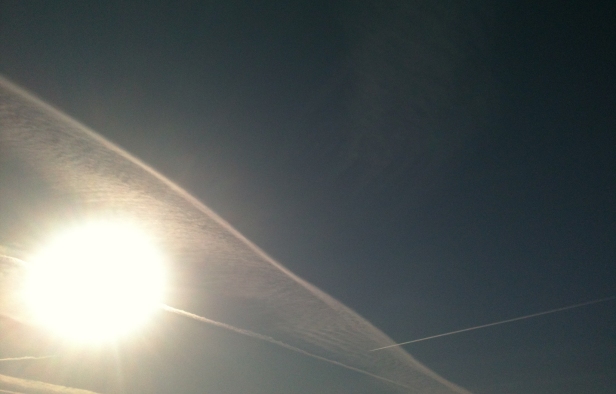 It seems aerosolized clouds are being pulsed by ELF towers, conformed into a fine layer for weather modification purposes. In Northern California no longer are there clear blue skies, even when not a single cloud is present, a haze envelopes the landscape, looking like the remnants of a fire.

Many can attest the mind of a dementia patient deteriorates rapidly, generally out of nowhere, the disease being so fierce it seems abnormal. We suggest a consequence of these frequency programs, either planned or accidental, is the “triggering” of prion misfolding in humans and animals.

The following diseases are believed to be caused by misfolding prions.